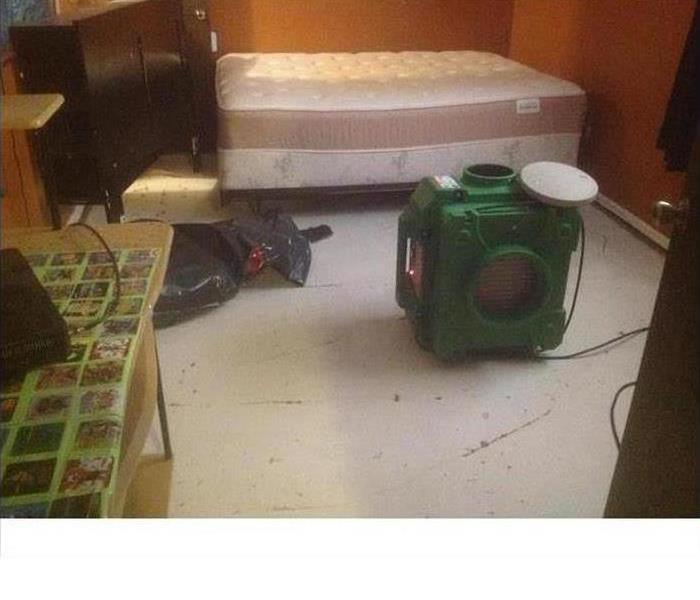 The air scrubber was set up to recycle the interior air through HEPA and activate charcoal to cleanse the air after a fire struck.

One of the first things people want to do when they experience a fire inside their Thomson home is to throw some water on the blaze. While this is most effective at the beginning stages, especially when directing the water at the bottom of the fire instead of the top of the flames, it doesn't work for all fires.

Kitchen fires that start when cooking oil or grease ignite in your kitchen in Thomson creating fire damage to large areas partly because they do not respond as hoped when water gets dumped on the fire. The splattering of oil also helps the fire spread. This can start a massive explosion. Because of hotspots' ability to restart fires after firefighters leave the scene, they often pour massive amounts of water into a house.

While we are not looking for hotspots themselves when we start mitigating a house, we do want to know where excess amounts of water might exist. Water left behind after fire damage can also cause damage of its own, in addition to the visible fire damage you see. It can affect places that escaped the fire, including electrical outlets and your heating and cooling system.

When imaging of these components show cooler temperatures, our building services team knows to inspect these units. Early repairs can prevent system failure and also subsequent fires from overheating related to corrosion. Heating systems that develop cracks can also put your home at risk of carbon monoxide leaks. Running the system while checking for elevated temperatures can show us where problems exist before they can worsen.

Electrical systems might show either a cooler area right after a fire if it remains soaked, or an increase in temperature when several appliances are using a significant amount of current. Either situation can indicate damage that we should repair before your family experiences problems during normal use.

In addition to locating still-damp areas in your home after a fire, our team at SERVPRO of Augusta South / Burke & Wilkes Counties can help homeowners in Waynesboro, Washington, and Wrens perform post-fire mitigation, restoration of damaged areas, and additional work on your property to ensure things return to preloss condition, “Like it never even happened.” Call our 24-hour services line at (706) 843-1990, so we can start the process of getting your family back home and comfortable again.